We are gradually paying off the piano loan and continue to fundraise but we still have a ways to go. If you would like to support our vision of creating a wonderful performing arts experience which includes the use of the Steinway piano, please consider making a donation to Friends of the Hastings Arts Center, a 501(c)(3) organization.
​
Checks payable now to our nonprofit, Friends of the Hastings Arts Center:
216 4th Street E
Hastings, MN 55033

​THANK YOU SO MUCH!!

How we acquired the Steinway Piano 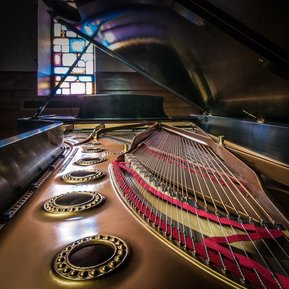 Because so many of you asked and want to know how we discovered the Steinway piano, we thought we would write it in words here. Enjoy!

In July of 2015 we were visiting Sarah's parents in Indiana. We came across a piano restoration company in a neighboring town (New Paris, IN) and discovered Chupp's Pianos. This company is family owned and run by Dennis Chupp. We were amazed at what we saw when we visited the piano restoration workshop and quickly began to understand the care and workmanship that goes into rebuilding these pianos---some that have been left to rot and decay.  During that visit in July, Sarah played a recently restored Steinway that was headed to Japan (!) and immediately got goosebumps to the sound and feel of a magnificent instrument. We told Chupp's that we were in the market for a grand piano for our new arts center up in Hastings, MN. We also mentioned that if they came across any pianos in the future to please contact us. We didn't have a deadline to acquire a piano, but we knew we would get one at some point for the center and also would need to raise money for the purchase.

Fast forward to March 2016. We were again visiting Sarah's folks and we told Chupp's Pianos that we were going to be in town and wondered if we could stop by. Dennis had said he had FOUR Model D 9-foot concert grand pianos for us to meet. And did we ever! As we walked into the workshop area, Dennis said, "Welcome to piano heaven!"  Sarah proceeded to play all of them and each of them had a unique, wonderful sound and touch. Dennis says that Steinways are like children. They are all unique and different, and have their own personality. Do they ever!  After playing the pianos for a while several times that day, and narrowing it down to our top two, we were able to negotiate a fair price for Chupp's and for us. Because we had started to raise funds for such a purchase at our "Rock the Church" event in January of 2016, we were able to put some money down on one of the pianos that we selected and that we would be in touch after securing the rest of our financing.

The 1929 Model D Steinway Grand piano we now have is one of the most amazing pianos Sarah has ever played, and those who have been able to experience playing it have said it is a magical instrument. Some have even said it "has a soul." "I have never had a Steinway piano respond so precisely to what I would like it to do as easily as this one," Sarah said. It truly is a rare find as Steinway pianos dated from @1924-1936 are considered from "The Golden Age of Steinways."  Our Steinway is even more unique because the wood that was used to replace the soundboard is made from red cedar, which is typically used for acoustic guitars. Usually the soundboards for Steinway pianos are made from white spruce. Perhaps the red cedar is what makes it sound so amazing. Whatever the case, we feel this piano was meant for the Hastings Arts Center and for the community that is supporting our vision. We know it has already provided and will continue to provide musicians and audiences with great concerts in the future.